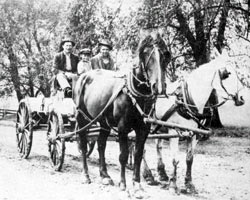 The beginning of human settlement in the Village of Gilberts can be traced back prior to the War of 1812. At that time, various Indian nations such as the Blackhawks, Algonquin, and Pottowatomies inhabited the rolling hills of this region. The open and undulant land that was home to these tribes presented many opportunities and a life of prosperity to the pioneers.

It was after the War of 1812 that General Scott started the quick domination of this region.  Scotts' troops chased the Blackhawks west of the Kishwaukee River, as they were believed to be the fiercest warriors and a threat to the white settlers. For the time being, the Pottowatomies and the Algonquins were spared from these invasions and remained in peace as they resided near the Fox River. But as pioneers from neighboring states and the European countries arrived, the race to settle the land continued and this area eventually became officially opened for white settlement in the 1820's.

In the spring of 1836, E.R. Starks and Elijah Rich filed claims to what would be Rutland Township, named after the Vermont City that had been their home before traveling to the Illinois frontier. The history of the Village of Gilberts begins with their official claims on this land. 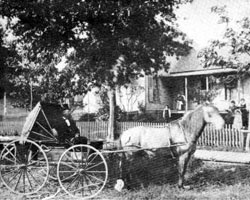 Much credit is given to the pioneers of this time, as they were the foundation to the growth of the area, known as Rutlandville. The Starks, Hills, Moores, Lynches, and McCornack families took up claims in this township and contributed to the development of this area. In 1839, Albro Gilberts arrived, establishing his farm in what is now the center of Gilberts. Although numerous Indians were left from the original inhabitants of the land, they were known to be harmless and were not of much concern to the settlers. Eventually, the Pottowatomie Indians sold their land to the settlers and moved west. By 1840, the entire area of Illinois was claimed by the pioneers.

Rutlandville was now flourishing and farming became the way of life with a few businesses opening to serve the farmers. The first post office was established around this time, approximately two miles from Pingree Grove. Growth within Rutlandville was emerging outward from Albro Gilberts' farm and the culture of this area began to develop. Rutlandville was noted to be a "Demographic Town". Local chapters of the Patrons of Husbandry were formed and the "grange" was an important part of the social and political life of the area. Education was very much prized by the settlers, as evident when district 300 was formed and boasted as the "best school house" in the country.

A key factor in the growth of this area was its proximity to the Galena and Chicago Union Railroad, now the Union Pacific Railroad. Around the year 1852, a post office was established near the railroad station and was named Gilberts Station. Soon after, the surrounding area of this establishment was also known as Gilberts Station. 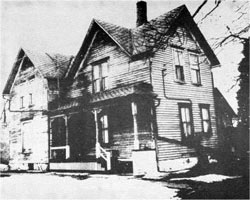 In 1855, Elijah Wilcox, and Andrew Pingree bought Gilberts' farm and platted the village. Because of Albro Gilberts' great presence and establishment in this area, Gilberts Station was renamed Gilberts in his honor.

The construction of St. Mary's Catholic Church was one component to the growth of Gilberts. Also during this time, Route 72 was in its early stages of development. The highway was almost never completed as it was interrupted by the development of a giant sinkhole that suddenly appeared after the spring thaw of 1852. This event brought citizens together as they worked with great effort to fill the "bottomless pit" with trees, rubbish, and rocks. After recovering from the excitement, the village settled into a central transportation point and furthered their construction of the Chicago and North Western Railway through the village. This enabled large amounts of rail freight, consisting primarily of milk that was collected from local farmers, to be shipped to Chicago.

In 1868, David Haegar, founder of Haegar Pottery, started construction on what would become the largest tile and brick factory in Illinois. By 1875, Gilberts was a thriving community. In June of that year, Andrew Pingree surveyed the entire area and laid it out in village lots. Gilberts' prosperity was also contributed by such establishments as the train station, two blacksmith shops, a steam feed mill, two grocery stores, live stock sales barns, a wagon shop, a drug store, a lumber store, several saloons, a dance hall, a local jail, two milk processing companies, an elementary school, and St. Peter Evangelical Lutheran Church. The Brick and Tile Company was finally completed in 1882 and employed about twenty people. The clay used came from a pit near the Galligan farm and at the turn of the century the pottery part of the business was moved to Dundee. Gilberts was incorporated as a town in 1890, with a board of trustees, a village president, and a local self-government. 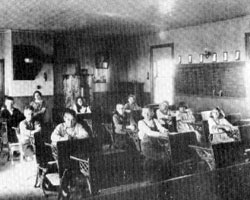 Despite all of these advancements, electricity was still not available in the town. Homes and streets were lit by gas. A big icehouse held ice for residents' own use for storing perishable foods.  Water for family use came from individual wells and there were no city utilities.  Many citizens traveled to Dundee and Elgin for banking and clothes shopping, via the electric train that ran every two hours into Elgin.

After World War I, life in Gilberts continued much as it always had. The Flu Epidemic in 1917 touched some lives, but for the most part, life was uneventful. In the mid summer of 1926, a large fire was started when railroad sparks ignited weeds near John Jurs' blacksmith shop, burning it to the ground. Although there was an active volunteer fire department, nothing could be saved from the flames.

When the Great Depression hit, life in Gilberts changed drastically, almost destroying the village. Businesses went under, causing the men to look for work outside of the community and leaving the farmers with no place to shop. "The Electric Train" the Elgin & Belvidere Electric Company was pulled and sold, eliminating transportation to surrounding communities. The railway trains were brought to a standstill, abolishing the transport of milk to Chicago. However, electricity did come to the area through the Rural Electrification Association. By 1930, Route 72 was completed and became the village's first paved road.

World War II did not affect Gilberts as severely as the past war. One drastic change was when the elementary school was closed and children were bused to Dundee. In 1956, the construction of the Chicago-Northwest Tollway started a renewal in the town. Although there was not a direct access to the road, it did spur interest in further development in Gilberts. In 1958, the fire department started its present form, consisting of two stations, one of which is located in downtown Gilberts. In the mid 1960's, a light industrial manufacturing area was established off of Route 72 and the core of the village was enhanced by four new subdivisions including Windmill Meadows, Dunhill Estates, Gilberts Glen, and Indian Trails. By the 1970's, the first industrial park was constructed along the southeast subdivisions and as growth continued, a second and eventually third industrial park was established.  In 1979, the Gilberts unit of the fire department, which was housed in a large multiuse building and contained three trucks, was finally completed.

Improvements continued to be made in the Village life. The old general store was converted into the Gilberts Post Office, which remains an important part of village life today. In 1988, a new water system was constructed when the old municipal well endured problems from methane gas collecting in the well house. Also in this year, the Village of Gilberts experienced its fifteen minutes of fame when President George Bush visited the town during his election campaign.

The Village of Gilberts today, is facing the effects of urban sprawl. As Chicago has continually increased in infrastructure, density, and many other facets of urban development, citizens are searching for a more remote and quaint living environment. In preparation for the increased developmental trend, the Village of Gilberts looks back to its history and the core of its existence to preserve its identity and character. Gilberts is a place close to major cities, but far enough away to provide room for healthy growth of both families and light industrial manufacturing. For these reasons, the Village of Gilberts must logically plan for its future and carry on the traditions and values that were so prominently established by the founders of this land.

The history of the Village of Gilberts has been compiled from the following sources: 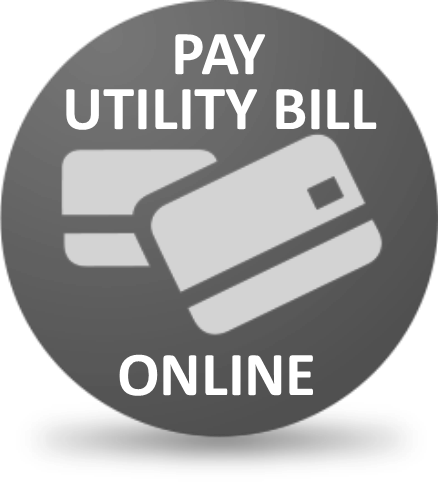